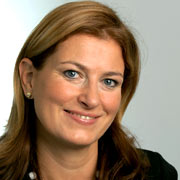 Dagmar is a Commissioner in the Monopolies Commission in Germany, a permanent and independent expert committee, which advises the German government and legislature in the areas of competition policy-making, competition law and regulation. Its reports are published.

Prior to joining Morgan Stanley, Dagmar Kollmann worked at UBS Philips & Drew Ltd in London for six years, both in Investment Banking and subsequently in the Equity Division.

Past mandates include a membership in the Advisory Board of the EUREX Group and the role of ‘Sherpa’ in the ‘Initiative Finanzplatz Deutschland’.

Dagmar Kollmann was born in Vienna, Austria, and was raised in Asia. She holds a Masters Degree in Law from the University of Vienna. She is married and has three children.